The problem we have where tryptophan is concerned is that the science that has been done all suffers from a simple fundamental flaw in that it makes the assumption that calming and sedation are the same thing. That means the tests that have been developed actually test sedation. As tryptophan doesn’t sedate (which is a good thing) it will always fail these experiments.

Some of the papers referred to in this post use the “Reaction Speed Test”. That measures the instantaneous flight response to a scare over a distance of just two metres (about half a second). In those tests “control” (untreated) animals canter away at about 5 metres per second. Sedated horses trot away at about 3.5 metres per second. Give horses sedative drugs like Acepromazine (ACP, ACE, Sedalin) and they trot away. Magnesium, in small doses, also slows the reaction response down to a trot, which is to be expected as its sedative effects are well understood by the biochemists and neuroscientists – though many equine nutritionists argue against this.

To understand this we have to consider the role of serotonin. Serotonin is important in this discussion because it is made from tryptophan. Serotonin has two major and completely different jobs in the body:

1) Inside the brain serotonin is used as a neurotransmitter. That is a chemical message sent from one nerve cell to another. It is only used in a relatively small part of the brain and that is involved in our and our horse’s sense of wellbeing and relaxation.

If there is enough tryptophan to make serotonin, this part of the brain will function normally and the horse will have this ability to remain calm. This is about 10% of the serotonin in the body.

2) 80-90% of the serotonin in the body is actually used in the gut. When an animal is stressed it produces serotonin and that tells the gut muscles to contract, empty the gut, make the animal lighter and so facilitate flight or fight. Many of us have witnessed this effect on our horses, whether it’s putting their travel boots on to get into the trailer/lorry, or introducing them to a new environment: 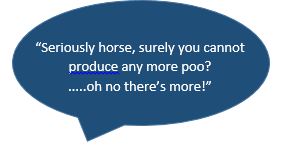 This understanding gives a simple explanation of how a horse’s tryptophan reserves may be depleted – STRESS.

Unfortunately for us, the ‘scientific’ research into the benefits of tryptophan does appear to be flawed, notably for the following reasons:

- Pre-stressed horses did not appear to be used. In fact many of the animals used were tested within their home environment, thus eliminating an element of stress from the experimentation.

- Additional sedatives were not removed from their diet in the lead up to the experiments – most notably Magnesium. For more information on the effects of Magnesium in a horse’s diet, read our extensive Magnesium section.

So having rather trashed the science what are the things that many years of experience and careful monitoring of outcomes in the real world tells us?

Tryptophan either helps or it doesn’t there isn’t much of a grey area. It will work in the situations described above but only if other nutritional issues are not impacting negatively on behaviour. This is why we nearly always work to get chelated calcium and magnesium right before using tryptophan to fix specific, stress related issues.

When we first investigated tryptophan we were aware of the claims that it could affect stamina. So we gave a gram or two very carefully. Then one of our sponsored riders gave a 4* event horse (with a history of stress in big dressage arenas) 40 grams! The horse completed all three phases perfectly – no stamina issues on XC at all. Since then we have often started horses on 10g or 20g and never had any stamina issue reported in any horse (including endurance horses).

As horses gain in confidence their need for tryptophan diminishes. The horse mentioned above ended the season on just 3 grams a day and later dropped to no tryptophan at all at which level it qualified for a senior British team.

The eventing anecdote quoted above took place in 2011. We have been selling tryptophan since then and, based on customer feedback, refined the advice we give and the circumstances in which we use it. In the right circumstances it is a really powerful nutritional tool with no downsides that we have identified in normal use.

You can buy Tryptophan as our product FineTUNE 3. It is third on our fine tune list primarily because it doesn't taste very nice and we seem to need more of it than Tyrosine.

For more information on how your horse’s diet can affect their behaviour, please speak to one of our advisers on: 01453 836974 or email us on advice@equifeast.com