February of 2019 my horse tested positive for N/P2. I spent the next year trying everything to alleviate his symptoms. His muscles were hard as rock, couldn’t canter, tripped constantly, cold backed, cinchy, hated cold bathes, grouchy a lot of the time. I thought I had found the best solution when I added whey isolate. He showed some improvement. I thought that was the best I was gonna get and considered retiring him for the most part.

But I came across the EquiFeast trial and decided I had nothing to lose. At first I didn’t see much improvement. I had been including devils claw in his daily supplements. Malcolm suggested that I remove it. So I did. Within 2 weeks, I had a “normal” horse. His muscles are soft, he plays in the sprinklers, no longer cinchy or cold backed, rarely trips and his canter is back! We are still working on conditioning as we spent almost a year doing nothing. But I could not be happier with the results. I have been able to remove all the other supplements other than 2000 vit E. Not sure he even needs that. But better safe than sorry. Overall I am spending less money than I was before. I urge anyone struggling with a PSSM horse to try it. It won’t help every horse. But if it does, it helps A LOT!

Editor's note: Devil's Claw is a herb often used as an anti-inflammatory and pain killer. It is one of many herbs and amino acids classified as "GABA Agonists" or "GABA Modulators". These hit the same receptor as diazepam (Valium). Whilst some horses sedate OK on these, many do not. Jesse is an example of the later. The diazepam receptor is found in a number of places in the body - it isn't just in the brain. For a fuller explanation of GABA issues see this link:
https://equifeast.net/herbs-calming-and-equifeasts-approach/ 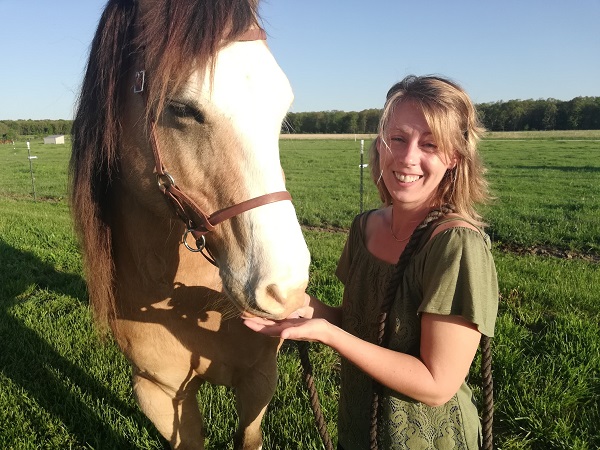 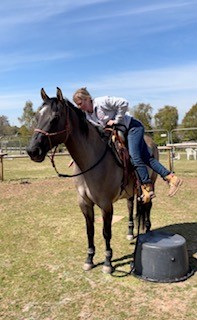 I cannot believe my luck to have Max enrolled as part of this trial. Everything led me to your product and I am so pleased with the results.

I no longer look at Max with a critical eye picking up where he might be uncomfortable, but now purely with joy and excitement for our future.

After years of trying just about every type of magnesium available, without it his muscles are now soft all the time. When I say all types...I mean that. Not only powders added to his food, but also magnesium sprays and crystals to dilute with warm water and sponge on. I have to resist the urge to prod him just to keep checking! He is also the calmest he has ever been.

He is back out on grass although limited grazing and I have even been able to start groundwork. I am pleased with how he is moving. No sign of any disunited canter or reluctance to go forward. He moves in a lovely relaxed way and regularly volunteers extended trot and flying lead changes in the paddock, as if to say look at what I can do now!

I am able to work through therapeutic exercises and body work and actually see them “hold”. His feet wear and wonky growth showed the signs of a horse with compromised movement. These are starting to rehab beautifully.

At the beginning of the trial, his face slimmed down and there was no locking of his hind fetlocks and he was super calm and chilled. Previously his jowl and nose were swollen, he was very grumpy and getting aggressive with the other horses.

Muscles all lovely and soft.

In the second week, there were a couple of days where his jowl looked a little swollen and one hind fetlock clunked when I went to pick it out, but only slightly locked at the last point of bending upwards.

I had no choice but to put him out on grass on week three of the trial as he and the other two boys kept escaping from the sand school.

He has been back on my version of lean muscle for the past two weeks. Probably when the sugars started reappearing. He became a little footy. I had contemplated giving it back to him before as he does look bloated without it, but did give it a good try without.This was one of the supplements that you said would be ok to keep so I hope that is ok, but I can’t take a chance of him getting laminitis and his front feet also went a little puffy on the coronet band. (Note Max is going to be trialling some EquiFeast development products to deal with this which was always an expected part of the trial).

Another huge difference is that his poll and neck are starting to release. He now loves to have his muzzle rubbed and I can touch the sides of his mouth, even being able to gently pop a finger in either side. This was always a huge issue with him and the last time he was sedated to have his teeth done was a disaster. He had a tie up afterwards and it took ages for him to recover.

So many milestones being achieved this year I’ve been sick with worry after the events from last year with annual vaccinations and teeth being done under sedation causing a total lock up on my boys right hand side and then blowing an abscess that I felt sure he must have broken his leg. This abscess was a nuisance for a good 6-8 months.

For my horse the turning point has definitely been since we had the good fortune to join the Equifeast trial.

I’ve always thought he was facially and poll sore which then affected other parts of his body.

I’ve been using the LamiCORE since February and I haven’t had a bad or off day with him since. I do still feed lean muscle to counteract grass.

I’m being able to rectify odd hoof growth patterns I think due to previous compromised movement, release his poll and actually start to work through the awesome training methods I love from Warwick Schiller.

This group is one I hold dearly and it gave me the courage to try dentistry under Dormesedan. It’s such a wealth of information in one place when you enter your worry in the search bar.

So far so good. Teeth have been done and he is back out in the field. So different from last year when he locked up and was struggling to breathe

Hold us in your thoughts, this horse is my absolute horse and I would love to ride him. So far he is standing up to the all the preparations and being worked most days.

I just wanted to get annual jab and teeth over before pushing on in earnest…wish us luck.

We all need the good stories on here…you can search my broken-hearted ones too.