At the end of our first five weeks I’m going to reservedly say that I see improvement in Orion. He has always been spooky and some days still is, however, his keeping has changed in as much as a new horse has been added to our herd and due to some paddock fisticuffs, Orion had to be removed since he sustained an injury to his forearm that needed tending and I’ve since kept him apart from the other two. I can’t decide if sometimes he reverts back to his old spooky self because he has no companion with him at the moment and perhaps gets a bit worried, or if the loading dose of Break Free might have been affecting him.

If paddocked with or beside he starts fights with the others, not due to aggression he just has a high play drive that the others do not share so they put him in his place, this is not a new thing, he has always been like this, though for the past year or so he hasn’t displayed this tendency, it only resurfaced when the new horse arrived which coincidentally was when he began the trial.

Orion had his first trip off property in 3 years a couple of weeks ago for a dental visit. I spent a week re-familiarising him with the float and he loaded, travelled and unloaded well. The weather was horrendous when we arrived and he was quite wired but all things considered all went well.

I have been trying to get him used to fly spray since i got him several years ago and he has always hated being sprayed and could never stay still. Just last week we had a breakthrough and I was able to spray him without him panicking about it.

We also had the best farrier appointment last week. Normally Orion would be all over the ship not standing still and snatching his legs away, but this visit he stood in the one place the whole time although he did lean his weight on the poor farrier, but only snatched his leg a couple of times.

Because Orion is unstarted it’s difficult to tell if he would be improved if he’d been a ridden horse but his muscles are usually soft when I palpate them so I’m pleased about that.

I have now dropped him down to the maintenance dose of Break Free and I’m looking forward to seeing if we get more improvement over the next few weeks. 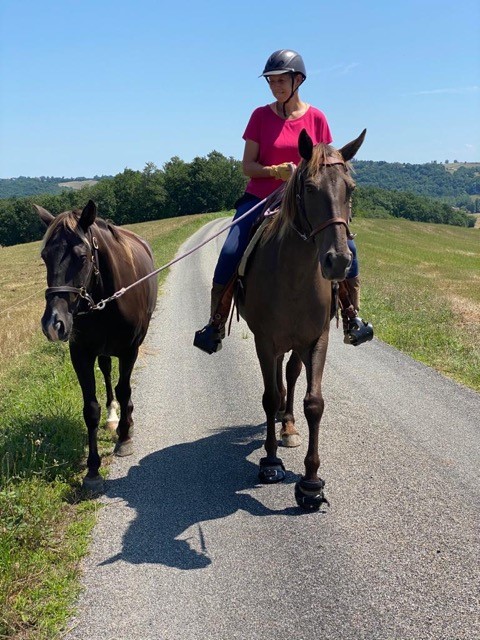 Desi is a 8 year old PSSM2 horse (n/P4, n/Px), he was gene tested a year ago but been symptomatic since he was three - when he started with sticking stifles, running through bridles and ropes etc. He did not respond to the high protein diet, and the vitamin E sent him crazy.His main symptoms are catching / sticking stifles; dodgy function on his back legs, difficulty walking down hill; high anxiety / separation anxiety. anxiety-induced sloppy poo. He sees an amazing body worker every month who helps him let go of the compensations he is putting in his body but his mind is getting worse, and there is really no improvement in his hind end function.

(12 July Update ) Desi has just this morning come to the end of the first pack (started on 16th June).I am hoping to get him out on Wednesday to see how he is, but I would broadly say that we have had some improvement in both his hind end function (by eye) and in his anxiety - but this has not really been tested out in the world in the last two weeks.The trimmer came last week, and he continues to have difficulty standing easily on three legs.

(18th August update) I just wanted to give you a bit more of an update on Desi. He continues to do well - it is looking like both his body and his mind are improving enough to progress. He will now let me groom him again, and he is easier to pick up his feet. He stood better for the trimmer the last time, and I have started to pony him out from another horse and, whilst he is relatively slow, he is calm and happy. This means that we can progress his physical well being, and do it in calmness so that he gets used to being relaxed in work.  I haven’t used the fine-tune products as I decided that the priority was to get his body moving more, and that his head could wait a little, so we are doing everything with one of his herd mates alongside for now. So I told you I would let you know how it went today. He is nice and calm when he has a horse he knows there, but when that horse left (it was my youngster having a training session) he lost his head, and we had rearing and spinning, and zero sign of the previous calmness.  I believe this to be one of his PSSM symptoms, as he was previously not this horse - happy to hack out alone or in company. Physically he does seem a degree or two better, but in order to really test that I am going to have to organise one of his field mates to hang out with us while I try and do some school work with him - today that wasn’t possible.

He started showing symptoms at just 8 weeks old he is now 2 years old. Misdiagnosed as a wobbler , broken pelvis , paralyzed bladder , OCD , Colic! Blood work showed elevated liver high calcium low sodium low protein.After spending £1000’s on treatment with a hopeless prognosis told by 2 vets to PTS , I decided to stop all medication and cut off vets as they very clearly never knew what they was dealing with. I have sat for 16 months trying to figure out what has been wrong with him.I noticed positives when changing little things in his diet and gut balancers really helped.I knew he wasn’t a wobbler all along! I’ve worked with horses all my life and done a lot of horsemanship with top highly regarded people I’ve seen this so many times before yet no one ever had an answer for it.Diet and salt along with stopping the steroids actually stopped any neurological signs he was showing.I did have him on magnesium like everyone says but this made his mind work against him.I’ve now managed to get him stable and out in a field 12 hours a day instead of 5 hours with the help from EquiFeast he is also more comfortable in his posture his mind is working with him now and his skin issues are clearing up ! No more morning stiffness.