There are many horses having back problems due to muscle, tendon, ligament and bone damage. These can present as anything from hlameness to poor performance. An extreme example of this is Kissing Spines (KS). The precise causes of KS are unknown but it is believed to be a multifactorial issue. Treatment for KS ranges from physiotherapy through steroid injections to surgical operations to removal of part of or the whole of one or a number of spinal processes. Another surgical option is the cutting of the inter-spinous ligament.

The aim of these two trials was to investigate if supplementing the diet with chelated calcium can improve horses’ welfare and performance enough to render unnecessary surgery in horses that suffer with back problems.

In EquiFeast’s Australian trials on horses with oxalate poisoning, chelated calcium has been shown to help horses with muscle, tendon & ligament and bone deformation. Since these are the organs most implicated in Kissing Spine this disorder was selected as a good model for the impact of chelated calcium in an environment not complicated by oxalates.

Two trials were conducted in the UK. The first used a comprehensive supplement based on chelated calcium but also including antioxidants and commonly recognised “joint supplements” (now marketed as FlexEasi but previously sold as KS+) and the second used just chelated calcium. The same methodology was used in both trials.

All the horses selected for the trial had previously been diagnosed with Kissing Spine of varying severity by equine veterinary surgeons. Horses with Kissing Spine were chosen as they usually have multiple factors contributing to the disease so covered all areas investigated. Horses’ diets were analysed for magnesium as research has shown that providing too much of this in the diet can have adverse effects. Supplements were created to approximately equalise the magnesium contents of the diets using Calinnova Ltd’s “Magnesium Factor Calculation”. All horses were overseen by their regular vet/physiotherapist.

Ten horses started the trial but two were removed as the severity of their overall condition caused their owners to euthanise them. Eight horses completed the trial.

Each horse was loaded on a supplement KS001 either a,b or c depending on the magnesium level of the diet. (Since this trial was conducted our attitude to magnesium has changed. If we were repeating this we would add no magnesium to any of the trial supplements.) This loading period is normal procedure for chelated calcium supplements. KS001 contains a loading level of chelated calcium and a maintenance level of all the other active ingredients.

Each horse was then transferred onto KS002 again a, b or c according to the magnesium level originally selected. KS2 contained the regular maintenance level of chelated calcium but the same levels of all other nutrients as KS001. This supplement was continued for the next 5 months with feedback forms being completed at monthly intervals.

No placebo was fed as it was deemed unethical to have a horse in pain on a trial for 6 months knowing that it would make no difference.

There were six horses in trial 2.
This trial was identical except that instead of the comprehensive supplement the horses were fed just a chelated calcium supplement adjusted as per trial 1 for the magnesium content of the diet.

No placebo was fed as it was deemed unethical to have a horse in pain on a trial for 6 months knowing that it would make no difference.

11 issues commonly noticed with kissing spine were analysed with a scoring system ranging from 0-5, with 0 being no problem and 5 being severe problem. The first three characteristics were selected to be primary physical/mental characteristics:
• Muscle relaxation
• Suppleness
• Behaviour

The remainder were characteristics that may follow from training or rehab work benefiting from the physical and mental gains.
• Ridden behaviour
• Lunged behaviour
• Overall condition
• Tail swishing
• Straightness
• Lameness
• Other ailments

Improvements were seen in all areas looked at. Muscle relaxation (P<0.05), suppleness (p<0.01) and behaviour (P<0.05) produced statistically significant results when put through the Mann Whitney-U test (Our thanks to Dr Andrew Hemmings of the Royal Agricultural University for the statistical analysis).

The results are presented graphically below with the starting severity score in blue and the improved (lower) scores in orange: 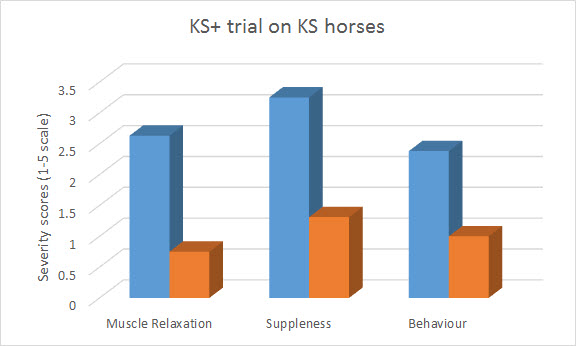 Clear improvements in the observational scores were achieved for all three characteristics and all were statistically significant (Muscle relaxation (P<0.05), suppleness (p<0.01) and behaviour (P<0.05))

Horses showed improvements during the first two months and then tended to plateau. So the trial was stopped at the end of month four. All horses were then switched to the more comprehensive product used for trial 1 and improvements appear to have started again however these results have not been full analysed and are not presented here. 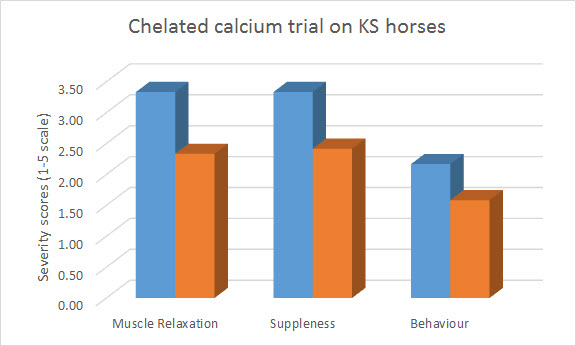 Here are some “before, during and after” pictures of one of the trial 1 horses, Charlotte Croom’s Star.

Feeding the comprehensive KS supplement (Trial 1) improved muscle relaxation, suppleness and behaviour which seems to have had an effect on the other aspects looked at in the trial, possibly as it enables owners to manage the horse in a different way.

Trial 2 demonstrates that chelated calcium makes a significant early contribution to this process that enables other, more traditional, joint and soft tissue supporting supplements to be more effective. So we believe that chelated calcium provides an excellent foundation on which other nutrients can build. we think it does this by improving calcium signalling which is used by bone, muscle, tendon and ligament cells.

Further work using horses in a more controlled trial managed by the same person and overseen by the same vet would help to make the results more accurate.

The product used in Trial 1 has now been commercialised in the UK and is known as FlexEasi (formerly KS+). It is available in a loader and a maintenance format and both of those are available in four versions with differing magnesium content. We are making this available in North America by post from the UK.

Potential customers looking for a unique and incredibly comprehensive horse mobility supplement are encouraged to contact EquiFeast and discuss their animal and its diet with a trained advisor.

Customers in Australia - this product is marketed as WINNINGEDGE in Australia https://equifeast-australia.com/horse-supplements-and-licks/winningEDGE/