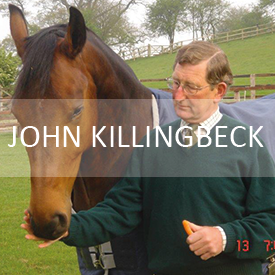 For 20 years John Killingbeck was the official team vet for the British Eventing team at International events from Europeans to WEG to the Olympics. He also founded one of the most successful equine practices in England. Here is his endorsement of our work:

To whom it may concern.

I have known Malcolm Green for many years as a client and as the founder of EquiFeast.

During that time I have been aware of his interest and research into the nutrition of cage birds and equines. In recent years I have taken a greater interest in his research into equine nutrition and particularly in the effect of calming supplements. It is my experience that the majority of calmers on the market have little more effect than a placebo.

However, I have used and recommended his products and followed his advice regarding balancing dietary minerals and the success rate has been considerably higher than with other products which claim to have a calming effect on equines.

I never hesitate to advise clients with difficult horses to seek advice from Malcolm Green because I am entirely confident his recommendations will be directed to the best interest of the client and their horse without commercial bias.

My name is John Michael Killingbeck and I have been a veterinary surgeon since July 1973. I hold the qualifications of Batchelor of Veterinary Medicine and Surgery (BVM&S) from the Royal Dick School of Veterinary Studies and a Batchelor of Science from the University of Newcastle upon Tyne, Department of Agriculture.

During the whole of my career I have been engaged in equine practice and currently work part time for the B&W Equine Group Ltd.in South Gloucestershire. The practice has a large referral component to which numerous practices in the South West regularly refer unusual and challenging cases for diagnostic investigation, treatment and surgery.

I have a longstanding involvement in the competition world and have acted as a three-day-event team veterinarian for several nations and in that capacity attended four Olympic Games (Seoul, Barcelona, Atlanta & London). In 1992 I was appointed veterinary surgeon to the British Three Day Event Team and I attended the Atlanta Olympic Games in this capacity in 1996. I have also acted as team veterinarian to the Spanish Team at the 1989 European Championships at Burghley and to the Belgium Team at the Punchestown European Championships in 1991. In 2012 I was again appointed by the Japanese Equestrian Federation as veterinary surgeon for the London 2012 Olympic Games. In 2018 I was privileged to be appointed veterinarian to the Hong Kong China team for the Asian Games in Jakarta.

I act as an official FEI veterinary delegate at several three-day-event competitions in the UK. I also officiate at the Badminton three-day-event and the Gatcombe Festival of Eventing championships.

Throughout my career I have had a strong interest in farriery and was a regular examiner for the Worshipful Company of Farriers for almost three decades. I regularly officiated at their higher grade examinations (Associate and Fellowship level). The Fellowship examination is the highest farriery qualification available worldwide. In November 2003 I was admitted to the Freedom of the City of London by the Worshipful Company of Farriers.

When the post-graduate qualification of the Certificate in Equine Practice (CertEP) was introduced by the Royal College of Veterinary Surgeons in 1985, I was one of the few veterinary surgeons in the country to be successful in its inaugural year. I have since served a three year appointment with the RCVS as an examiner for this qualification.

Until 2017 I held an external lectureship at the Royal Agricultural University, Cirencester and presented a series of veterinary lectures on the International Agriculture and Equine Business Management degree course each year. I regularly present lectures to various equestrian organisations on both veterinary and general equestrian subjects.

I have lectured extensively to veterinary and lay audiences throughout the UK and Ireland on veterinary subjects and on the production and management of competition horses.

I have undertaken occasional judging appointments at horse shows, including The Royal Show and The Royal Bath and West Show in recent years where I have judged young stock, broodmares and particularly young sport horse classes. Similarly, I have also acted as a veterinary assessor for Sport Horse GB in their young horse evaluation classes and have judged Burghley Young Event horse classes on several occasions. I have also judged the Supreme Hunter Championship at the British Show Horse Association National Championship Show and In-Hand Cuddy Championship classes.

I have considerable experience in the practical aspects of horse management and riding and have competed in most disciplines from polo to point to point steeple chasing. In conjunction with my wife we produce show horses of the highest calibre which have been successful in winning several championships at The Horse of the Year Show.

All prices are in USD.