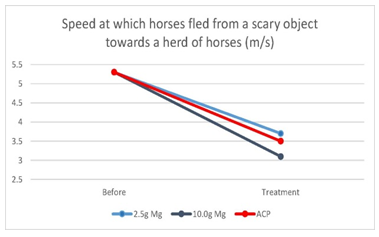 Magnesium is a sedative. It has been used in anaesthesia in both horses and humans for decades. The mechanisms by which it has this effect are pretty well understood (blocking NMDA channels and calcium receptors). In effect it prevents the normal switching on of cellular processes inside cells all over the body. When this happens in the brain, the horse is sedated; think of it as a chemical brain impairment. It is because of these issues, injectable magnesium is on the FEI’s prohibited substances list.There is a very reasonable question to ask. Can we achieve a similar sedative effect with oral magnesium? Jess Dodd in Australia has gone a long way to suggesting we can. She measured how fast horses ran away from an acute scare and compared the effect of magnesium supplementation with the veterinary sedative Acepromazine (ACE, ACP, Sedalin). She then found similar results when using both 2.5 grams and 10 grams of magnesium.

A test developed in Australia measured the speed at which a horse flees from a scare, for just the first two metres (about half a second). This is measuring the immediate reaction to something it doesn’t understand. Most of us would expect our horse to flee from something scary, but then very quickly assess the risk and stop.

The researcher (Jess Dodd) found that when horses are not sedated, they cantered away for those first few meters. Whereas if sedated with Acepromazine (a veterinary sedative also known as ACP or Sedalin) they trotted away; their natural spook response was dulled down by the drug.

Small amounts of magnesium added to a diet had the same effect. Magnesium-fed (sedated) horses also trotted away from the scare please see graph.

The problems come with the longer term response to this sort of drug induced sedation. These horses may be slower to react, but they are then so poor at risk assessing they will often spook at all sorts of things! Sometimes they are looking for threats everywhere, from behind hedges to underneath the dressage white boards. Anxiety levels increase and as a result, all sorts of behavior may occur like: box or fence walking, separation anxiety, stopping at jumps and dragging riders around courses. You name it the list of different behaviors is very long.

Horses should be good at assessing the risks in their environment and far too often that is simply not happening. In our experience and opinion, sedating them with nutrients that impair brain function, means they’re highly unlikely to assess the risk difference between a butterfly and a lion.

Furthermore – if we impair brain function, can we then expect horses to make good decisions when jumping? To us, this makes sedation a dangerous way to “calm” our horses. 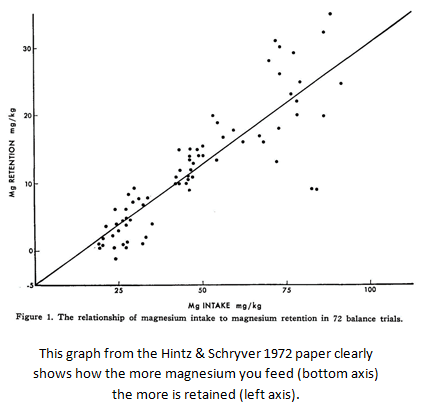